Yes, just like our patients, many celebs have had a vascular access device placed to receive medical treatments. As an infusion nurse, I have made mental note of celebs who have publicly admitted they’ve had a PICC line or any other central venous access devices (sad, I know).

And the latest celeb with a PICC line is Good Morning America (GMA) anchor, Robin Roberts. She has publicly announced she has MDS (myelodysplatic syndrome) and will begin pre-treatment in preparation for a bone marrow transplant. (see her video here.. http://www.youtube.com/watch?v=4Kjun3ukZJk)

I have just recently switched to watching GMA in the mornings so was surprised but knew why she had the colored arm band on her left arm. 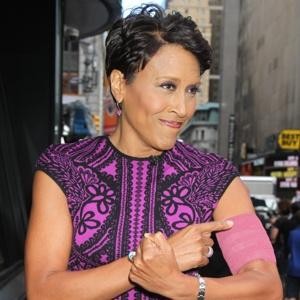 What a clever way to disguise a PICC line – an arm band that matches her outfits. There were reports saying viewers have sent her “arm bandages” so she won’t run out. This isn’t exactly new since many of my patients have been using those to cover up their PICCs, albeit not color matching their outfits.

So why am I fascinated with celebs with PICC lines? I’m sure I’m not the only nurse who does (am I? LOL). But putting aside the celeb status, they are regular people with illnesses that they didn’t bargain for. I am concerned just like I am with my patients and hope their lines are well cared for (no doubt, being a celeb) and be free of complications. Just like my patients, I wish them well with their treatments. I celebrate with them as they complete their treatments and cry if they outcome isnt what is desired.

Celeb or not, cancer doesn’t discriminate, and vascular access devices play a big role in their treatment. Good luck to Robin Roberts…and just like what I say to my patients…”you will always be in my thoughts and prayers.”

8 thoughts on “Celebs have them too…”