I came across a very unfortunate incident while reading a pharmacy colleague Jerry Fahrni’s (@jfahrni) blog post: ” CSP error results in death of a patient”

The post was about a medication error at a hospital in Oregon. According to news reports, a woman arrived for treatment in the emergency department (ED) following brain surgery that had been performed at a different out-of-state hospital. She was supposed to receive intravenous (IV) fosphenytoin for seizure control. Instead, the pharmacy accidentally added rocuronium to the IV bag, which was labeled as fosphenytoin. The preparation error was not identified before the medication was dispensed to the ED. The rocuronium caused respiratory paralysis, and the patient experienced cardiopulmonary arrest. The patient suffered anoxic brain injury despite initial resuscitation; she was taken off of life support 2 days later and died shortly thereafter. Because the bag was labeled as fosphenytoin, ED staff had no way of knowing the medication within the bag was rocuronium.

A truly sad and tragic incident and we hope we learn from this so it will never happen again. It did, however, made me think of an age-old question: how do we (nurses) know what’s in the IV medication bag?

The answer? No, we don’t really know what’s in the IV medication bag mixed by the pharmacy. There is no way to know and thus, we (nurses) rely on the label on the bag to tell us what’s in the medication bag and TRUST the IV pharmacy admixture IV flow process established by your institution’s pharmacy.

TRUST…that’s what the ED staff did in this case. Because the bag was labeled as fosphenytoin, ED staff had no way of knowing the medication within the bag was rocuronium. They had no reason not to trust the label. 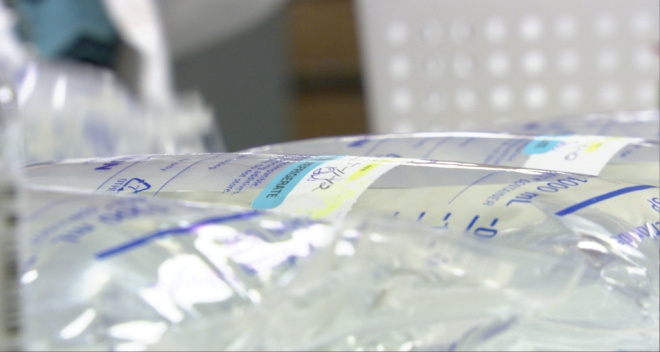