At the end of January, the snail mail delivered the eagerly awaited 2016 Infusion Therapy Standards of Practice in my mailbox!! Finally… 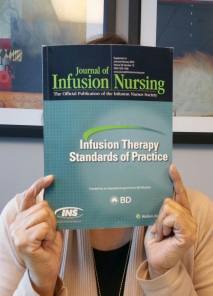 I must admit, I don’t have all the 2011 Standards of Practice (SOP) memorized – (shocking, I know) so I just had to pull my old copy out to compare and contrast.

So friends and colleagues, don’t miss out on this important document. Get your copy now from the INS website – click here.

My Tweets
Join 6,163 other subscribers